In 1970 Susan and I were freshman at UW-River Falls. That is were we met and we have been together ever since. Our two children are all grown up with families of their own. Susan and I have been blessed with five grandkids.

With a degree in Animal Science and a minor in Farm Management, we moved to NW Illinois to manage a 300 head registered Angus Operation. Susan's degree was in Elementary Education. Four years later we realized that there was no future there and went back to UW-RF. My Master's degree is in Agricultural Education and Susan's is in Math and Computers. In May of 1980 the Norwalk - Ontario School district hired me to be the new High School Agriculture Teacher and FFA Advisor.

Looking for a place to live we made a wrong turn and found ourselves at the end of a 1/3 mile dead end road with an all but abandoned, old fashioned dairy farm, at the end. It was basically a large open valley with wooded hillsides and ridge tops that was open to the South with a small creek flowing through it.

I turned around in the yard and told Susan that I could see us living back here. Shut off the car, got out and stepped up on the porch. An elderly woman answered my knock. I apologized for having bothered her and ask her if there was any chance the place was for sale. She looked at me funny and ask me to repeat myself. After I did she swung the door open wide enough for me to see her husband sitting at the kitchen table. An open phone book laid in front of him. They had been looking for a realtor, to list the farm with, when I knocked on their door.

Before we left their small farm house we had a tentative agreement and had put earnest money down on the 120 acre farm. I still get goose bumps every time I recall the story of how we happened to own what we lovingly refer to as Hawk Valley. It was fate, it was just meant to be. With two pairs of nesting Redtail Hawks residing on the property at all times, the name also seemed like a good fit.

Just before that 1980 school year started the high school math teacher resigned. The very upset principal came down to the Ag. room to vent. "How could they find a good math teacher with the first day of school so close?" he ask me. I told him Susan had the credentials to teach high school math. The school board hired her two days later. Things were falling in place and Hawk Valley Angus was now more than just a dream in the future. 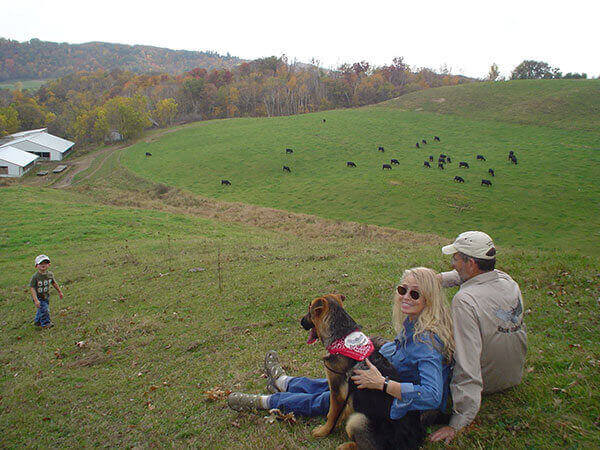 History of Our Angus Herd

As the manager of Raghild Angus in NW Illinois, I received a bred heifer as part of my annual salary. The owner was an attorney out of Chicago. He was not a cattle person. The 250 head of registered Angus cattle were part of the deal when he bought the 600 acre place.

One day Susan and I decided to sell our small group of cattle and use the money to purchase a better genetic base. We found two older brothers that were well established in the Angus business. With two pre-schoolers in tow they took an interest in us and I feel, pity on us. They sold us a very correct older cow with an A.I. sired heifer calf at side. The cow was bred back to their powerful pasture bull.

Our newly acquired cow calf pair really stood out back on the attorney's place. A year later we decided to give the attorney our three week notice and go back to UW-RF. Our own herd and place was our dream. Thanks to Susan's parents and some very close friends we were able to hold onto our tiny herd while we finished our second degrees, purchased and moved to Hawk Valley.

Using A.I. 100% our little herd slowly grew. Son Jason and daughter Julie were very good and dedicated to heat detection. We also purchased a few good females along the way. When we decided we needed a back-up pasture bull, in addition to A.I, we went to Mill Coulee Angus down by Prairie du Chien, WI. I had gone to college with their son Mark. We worked out an arrangement to have their popular A.I. stud sire, "Mill Coulee Time Traveler 02" come to our place and be our bull. After two breeding seasons he was replaced with their A.I. stud "Mill Coulee EXT 168-748." Those two bulls really had an impact on our herd, our future and the look of our cows.

I have been very lucky in picking new and upcoming Angus bulls out of the leading A.I. stud catalogs over the years. Several went on to become quite famous. We also have turned to Woodhill Farms outside of Viroqua, WI for several of our pasture bulls.